“To produce a mighty book, you must choose a mighty theme.”

Meet this week’s creative Rockstar Doggy Momma: Marya Lucas. Marya is beautiful, kind and extremely adventurous. She is fearless in her endeavors, whether it’s traveling abroad, break dancing, acting in an improvisational class or mastering her Spanish speaking skills. In addition, she wears many hats as an accomplished author, budding photographer and attorney. But her greatest passion in life is her papillon and partner in crime Jack Chaps.

When Marya first laid eyes on Jack Chaps it was love at first sight. How could she resist an adorable papillon with his tongue sticking out and ears large and in charge?! Not to mention papillon’s are one of the smartest breeds around, making Jack Chaps perfect for Marya’s move to the BIG city.

Jack Chaps has been with Marya through thick and thin for 11 glorious years. He helped her adjust to the move to Chicago from Columbia, Missouri, a pretty small town. Jack Chaps stuck by Marya through various jobs, boyfriends, and life’s ups and downs. He’s a constant companion and her little shadow. Plus he’s always happy to see Marya and the best friend a gal could ever have.

Jack Chaps also keeps Marya in tip top mental and physical shape. They take a walk together every evening around their Old Town neighborhood. This forces Marya to get out and get some air! Jack Chaps has also been instrumental in connecting Marya to all of her neighbors who are out walking their pups. In fact, Marya met one of her best friends 8 years ago when she saw Jack Chaps on the sidewalk and noticed that Marya was wearing a Mizzou shirt (she’s also a Columbia girl!!).

Jack Chaps is a complicated little character. He can be really outgoing and also really shy depending on the person or dog he meets. He tends to like people better than dogs and has strong preferences in that regard. He can act a bit like a clown, hiding behind pillows and jumping around like a bunny. Or, he can be very thoughtful and cerebral. He is THE dog detective after all!! 😉 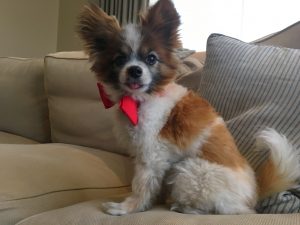 Jack Chaps inspired Marya’s book: Jack Chaps Dog Detective. Since Jack Chaps looks a bit like a cartoon character from Dr. Seuss and has always been popular with people, it was a perfect fit! The book began to develop when Marya first got the idea to take photos of Jack Chaps around Chicago, but then thought simple photos of him with landmarks wouldn’t be original enough. Therefore, after talking to another children’s book author and her friend, she came up with the idea of Jack Chaps being a dog detective, solving a city mystery. Her friend suggested the Great Fire, since it is one of Chicago’s top unsolved mysteries with lots of interesting lore surrounding it. Marya gushes that “it was amazing doing the photo shoots and planning, especially with her best buddy.” Plus the project inspired Marya to develop a true passion for photography!!

Now Marya showcases her book at readings throughout the city with Jack Chaps by her side and she is planning on doing a series of books featuring Jack Chaps solving mysteries in cities throughout the world!! Furthermore, Jack Chaps is a victorious cancer survivor and Marya’s passion project is developing a book where Jack Chaps Beats Cancer and proceeds will be donated to cancer research. What a rocking Momma and pup?!!!! STAY TUNED for their next BIG adventure coming to a bookstore near you!! 🙂