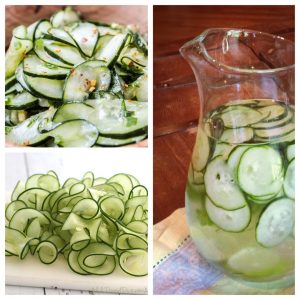 It’s summer which means cucumbers are in prime season!! Cucumbers are not only tasty BUT they are a great food for weight loss during the summer months.

Cucumbers are one of the vegetables with the highest water content, which means they offer valuable vitamins and minerals, while still being super low in calories – only about 16 calories per cup. Since they are about 95 percent water and full of fiber, they take up room in your tummy and visually add volume to your meals without weighing you down.

Cucumbers are also a great detoxifier for your liver and a natural diuretic!! They reduce bloating and uncomfortable water retention, which makes them perfect for a day at the beach or after a summer night filled with salty food and alcohol.

Plus they’re simple to add to meals. Here are a few suggestions:

• Make a side salad at your BBQ. Instead of coleslaw and fatty salads, cut a cucumber into thin slices and toss with apple cider vinegar, Flaxseed oil and sesame seeds (sliced carrots optional).

• Use a spiralizer to make cucumber “noodles” in your favorite “pasta” salad recipe.

• Drink cucumber-infused water: Slice a cleaned, peeled or unpeeled cucumber into 1/2 inch slices and combine in a pitcher of water (or buy a special “infused” one on amazon!). Marinate for at least an hour, ideally over night. Also great combos: cucumber/mint, cucumber/lemon, cucumber/lime, cucumber/pineapple and cucumber/mint/lemon.