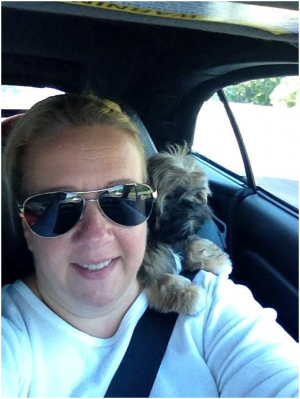 This week my Rockstar Doggy Momma is Michele Lawson. Once her daughters were out of the house and the last pet crossed the rainbow bridge, Michele and her husband Clay vowed to remain pet free but it didn’t last long.

Life got a bit topsy-turvy for the couple who has been married 30+ years. Clay took a job in Texas while Michele had to stay behind in Florida due to being the medical surrogate for her elderly mother. They planned to have Michele travel to Texas every 6 weeks for the first year. However, after about 6 months her husband called and asked her to consider reversing the current arrangement. He wanted her to move to Texas and travel to Florida every 6 weeks. Torn between being reunited with her husband and taking care of her mom, Michele needed time to think about the decision. A few days later, during a Skype call with her husband, he jokingly said, “If you move to Texas I will get you a puppy.” They both laughed at the absurdity.

Fast forward two months. Michele is living in Texas full time when she gets a text from her daughter Blair in Florida. “Mom, there is a 9 week old Shih Tzu going up for adoption tomorrow morning. I know this isn’t in your plans but I think he may be perfect for you.” The message was accompanied by a picture of the tiniest fur ball Michele had ever seen. A decision had to be made. Still with the “no more pets” rule or give the tiny pup a forever home.

The pups story weighed on her heart. Both the pregnant mom and dad of the pup were dropped off at the shelter. A family friend fostered the mom until she delivered her 5 pups. At 9 weeks, both the mom, dad, and pups were to be put up for adoption and the pups would move back into the shelter.

What’s a girl to do? 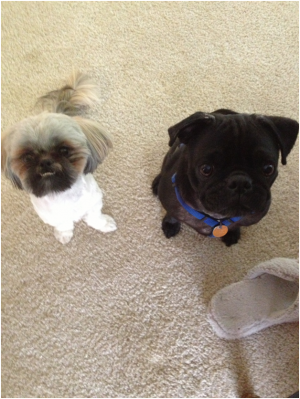 Giving her daughter the thumbs up, the pup was adopted the next morning and Michele started her drive back to Florida to pick him up. Not wanting to name him until she met him in person, her daughter just called him “little dude.” Needless to say, the name stuck.

Michele and Little Dude met face to face and it was love at first site. At ten weeks old, Little Dude took his first car trip from Florida to Texas with his new mom. It would be the first of many.

Now two years old, Little Dude has been joined by Kermit-the-Dog. Kermit is Blair’s 5 year old pug, who for medical reasons could no longer stay in Florida. Little Dude and Michele took another road trip to pick him up and bring him to Texas where they continue to help him on the road to a healthier life.

Michele is a freelancer blogger and writes for many clients. When asked what the best part of working from home was, she replied, “Being able to work in yoga pants with Little Dude laying on my desk and Kermit sleeping underneath it.” What an amazing Rockstar Doggy Momma?!! 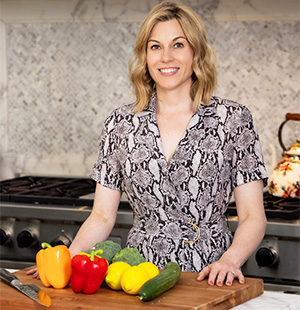